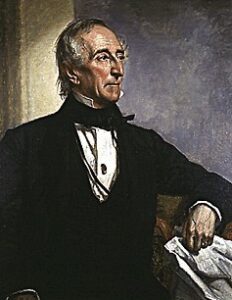 He studied law with his father, John Tyler (1747-1813), who became Governor of Virginia (1808-1811), and followed his father as governor (1825-1827) after a stint in the House of Representatives. During his time as U.S. Senator, Tyler, who had begun as a strict state-rights Democrat, grew increasingly alienated from the Jacksonian Democrats, especially by Jackson’s aggressive handling of the South Carolina nullification issue.

Drawn into the newly-organized Whig Party , Tyler was elected Vice President in 1840 as running mate to William Henry Harrison , on the slogan “Tippecanoe—and Tyler too!” and assumed the presidency upon Harrison’s death a month into his term.

Tyler was the first Vice President to assume the Presidency in this manner. On April 6 , 1841 , he took the Presidential oath of office as specified by the Constitution. The Cabinet and Congress agreed with Tyler that he was President and not merely Acting President, and as the Constitution was not explicit on that aspect of succession (until the 1967 ratification of the 25th Amendment ), both the House and Senate passed resolutions recognizing Tyler as President.

His presidency was rarely taken seriously in his time; he was usually referred to as the “Acting President” or “His Ascendency” by opponents. Further, Harrison was expected to adhere closely to Whig Party policies and work closely with Whig leaders, particularly Henry Clay . Tyler shocked Congressional Whigs by vetoing virtually the entire Whig agenda, twice vetoing Clay’s legislation for a national banking act following the Panic of 1837 and leaving the government deadlocked. Tyler was officially expelled from the Whig Party in 1841, a few months after taking office, and the entire cabinet he had inherited from Harrison resigned in September. The one exception was Daniel Webster , Secretary of State, who remained to finalize the Webster-Ashburton Treaty in 1842, demonstrating his independence of Clay.

For two years Tyler struggled with the Whigs, but when he took John C. Calhoun as Secretary of State, to ‘reform’ the Democrats, the gravitational swing of the Whigs to identity with ‘the North’ and the Democrats as the party of ‘the South,’ led the way to the sectional party politics of the next decade.

In May 1842, when the Dorr Rebellion in Rhode Island came to a head, John Tyler declined to use Federal troops to suppress the rioting adherents of a new state constitution, which extended Rhode Island’s restricted franchise. Tyler was of the opinion that the ‘lawless assemblages’ were dispersing, and expressed his confidence in a ‘temper of conciliation as well as of energy and decision:’

“I freely confess that I should experience great reluctance in employing the military power of Government against any portion of the people; but however painful the duty I have to assure your Excellency, that if resistance is made to the execution of the laws of Rhode-Island, by such force as the civil peace shall be unable to overcome, it will be the duty of this Government to enforce the Constitutional guarantee– a guarantee given and adopted mutually by all the original States, of which Rhode-Island was one.”

Tyler’s later career may be seen in the light of his actions at this turn of events. His letter declined to offer an opinion on the internal affairs of Rhode Island: “They are questions of municipal regulation, the adjustment of which belongs exclusively to the people of Rhode Island.” It was the first occasion in U.S. history where the question had arisen, according to Tyler, who was overlooking Shay’s Rebellion . He ended his published letter  “The people of the State of Rhode Island have been too long distinguished for their love of order and of regular government, to rush into revolution, in order to obtain a redress of grievances, real or supposed, which a government under which their fathers lived in peace, would not in due season redress. No portion of her people will be willing to drench her fair fields with the blood of their own brethren, in order to obtain a redress of grievances which their constituted authorities cannot, for any length of time resist, if properly appealed to by the popular voice. None of them will be willing to set an example, in the bosom of this Union, of such frightful disorder, such needless convulsions of society, such danger to life, liberty and property, and likely to bring so much discredit on the character of popular governments. My reliance on the virtue, intelligence and patriotism of her citizens, is great and abiding, and I will not doubt but that a spirit of conciliation will prevail over rash counsels, that all actual grievances will be promptly redressed by the existing Government, and that another bright example will be added to the many already prevailing among the North American Republics, of change without revolution and a redress of grievances without force or violence.”

Tyler’s last act in office was perhaps the most significant: he signed the bill annexing Texas , which had formerly been part of Mexico , thus extending the territory of slave-holding states and unbalancing the Missouri Compromise . The consequences of this act, which triggered war with Mexico , Tyler left to his successor, James K. Polk .

Tyler retired to a plantation named “Walnut Grove” he had bought in Virginia, renaming it “Sherwood Forest” to signify that he had been “outlawed” by the Whig party, and withdrew from electoral politics, though his advice continued to be sought by states-rights Democrats.

Tyler had long been an advocate of states rights , believing that the question of a state’s “free” or “slave” status ought to be decided at the state level, with no input from the federal government. He was himself a slaveowner his entire life and believed slavery ought to be extended to regions where it would be economically advantageous.

In February 1861, Tyler re-entered public life to sponsor and chair the Washington peace convention. The Washington peace convention sought a compromise to avoid civil war, while the Confederate Consitution was being drawn up at the Montgomery Convention . When the Senate rejected his plan, Tyler urged Virginia ‘s immediate secession. Having served in the provisional Confederate Congress in 1861, he was elected to the Confederate House of Representatives but died before he could take office.

He is the only President to have publicly committed an act of treason against the United States of America.

No comments to show.