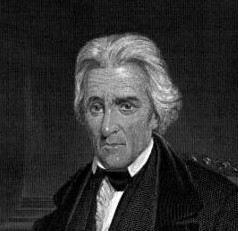 Wounded in a duel as a young man, Jackson was a frequent dueler.

Jackson was regarded as a national hero after defeating the British in the 1815 Battle of New Orleans .

In the Presidential Election of 1824 Jackson won both more popular and electoral votes than any other candidate, but did not receive an overall majority so the election went to the House of Representatives, where John Quincy Adams was chosen as President. Jackson beat Adams with a substantial majority four years later, and took office as President in 1829 .

Jackson was the first U.S. president who came from outside the original Revolutionary circle. Washington, Adams, Jefferson and Madison were notable figures in the War of Independence and in the formation of the U.S. Constitution . James Monroe fought in the Revolutionary War . John Quincy Adams was the son of John Adams. Jackson’s election represented a significant break from that past. Jackson was a general in the War of 1812 and fought alongside traders and other commonfolk. He was regarded as a “man of the people” and because some states had already changed legislature to allow those who did not own land the right to vote, this was the first election in which the “common folk” could vote, and they voted for Jackson.

Jackson is remembered for introducing the spoils system to American politics. Upon his election as President, a sizable number of people holding positions in Washington, DC, offices found that they had suddenly been replaced by supporters of Jackson, who had worked to ensure his election. Jackson saw this system as promoting the growth of democracy , as more people were involved in politics. This practice has endured in political circles in the United States ever since. Additionally, Jackson pressured states to lower voting requirements to further the expansion of democracy.

Jackson’s opposition to the National Bank

As President, Jackson worked to dismantle the Bank of the United States , which had been originally introduced in 1791 by Alexander Hamilton as a way of providing a national debt and increasing the power of the federal government. Jackson’s reasons for removing the BUS, as it was called, include:

This first Bank lapsed in 1811. It was followed by the second Bank, authorized by James Madison in 1816 to alleviate the economic problems caused by the War of 1812 . It was instrumental in the growth of the U.S. economy but was opposed by Jackson on ideological grounds.

Jackson followed Jefferson as a supporter of the ideal of an agricultural republic, and felt the Bank improved the fortunes of an elite circle of commercial and industrial entrepreneurs at the expense of farmers and laborers. After a titanic struggle with the Bank’s President, Nicholas Biddle , Jackson succeeded in destroying the bank by vetoing its 1832 recharter by Congress. It was a Pyrrhic victory, however, as the Bank’s money-lending functions were taken over by the legions of local and state banks that sprang up, and the commercial progress of the nation’s economy was not noticeably dented. The United States Senate censured Jackson on March 27 , 1834 for his actions in defunding the Bank of the United States.

Another notable crisis of his period of office was the nullification crisis (or succession crisis), 1828-32, which merged issues of sectional strife and disagreements over trade tariffs. High tariffs (the ” Tariff of Abominations “) on imports of common goods were seen by many in Southern colonies as unfairly benefiting Northern merchants and industrial entrepreneurs at the expense of those who had to buy the goods subject to the tariffs, mostly Southern farmers. The issue came to a head when the Vice President, John C. Calhoun , in the South Carolina Exposition and Protest of 1832 , supported the claim of his home state, South Carolina, that it had the right to ‘nullify’ – declare illegal – the tariff legislation of 1828, and more generally the right of a state to nullify laws which went against its interests. Although Jackson sympathized with the Southern interpretation of the tariff debate, he was also a strong supporter of federalism (in the sense of supporting a strong union with considerable powers for the central government) and attempted to face Calhoun down over the issue, which developed into a bitter rivalry between the two men. Particularly famous was an incident at the April 13, 1829 Jefferson Day dinner, involving after-dinner toasts. Jackson rose first and toasted “Our federal Union: it must be preserved!”, a clear challenge to Calhoun. Calhoun responded with a toast to “The Union: next to our liberty, most dear”, an astonishingly quick-witted riposte.

The crisis was resolved in 1833 with a compromise settlement which, by substantially lowering the tariffs, hinted that the central government considered itself weak in dealing with determined opposition by an individual state.

Jackson was responsible for the notorious Indian Removal Act of 1830 , and thus the Trail of Tears , in unconstitutional defiance of a Supreme Court ruling.

In 1829 , American demand for land due to population growth and the discovery of gold on Cherokee land led to pressure on Native American lands. In 1830 , Congress passed the Indian Removal Act which, Jackson signed into law. The act was challenged successfully by the Cherokee Nation in 1832 in the US Supreme Court as Worcester v. Georgia , in 1832. Despite the Supreme Court decision, Jackson took no action to uphold the Court verdict, and in fact would openly defy it; he was quoted as saying ” John Marshall has made his decision, now let him enforce it!”. As the court has no executive powers to enforce its decisions, Jackson’s executive disregard of the court, marked a time when the Judicial branch of government was very weak.

The state of Georgia held two land lotteries in 1835 to divide the Cherokee land, and Jackson sent military support to oust the Native population. This led to what is now known as the ” Trail of Tears “, which killed roughly four thousand Cherokee (25%), en route to Oklahoma.

Jackson’s wife died just prior to his taking office as President. She, Rachel Donelson Robards, had divorced her first husband (Col. Lewis Robards, sometimes mistakenly cited as “Roberts”), but there were some questions about the legality of the divorce, and she was never accepted in polite society, which Jackson deeply resented. His only child was an adopted son, Andrew, Jr. In his will, Andrew, Sr., left his granddaughter “several” slaves, his two grandsons each one male slave, and his daughter-in-law four female slaves, one of whom he had bought for her and the other three of whom were a household servant of his and her two daughters.

The story of Andrew and Rachel Jackson’s life together was told in Irving Stone ‘s best-selling 1951 biographical novel The President’s Lady , which was made into the 1953 movie of the same title, starring Susan Hayward , Charlton Heston , John McIntire , and Carl Betz and directed by Henry Levin .

Supreme Court cases during his presidency

No comments to show.