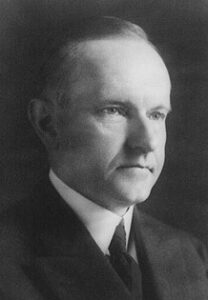 Coolidge was “distinguished for character more than for heroic achievement,” wrote a Democratic admirer, Alfred E. Smith. “His great task was to restore the dignity and prestige of the Presidency when it had reached the lowest ebb in our history … in a time of extravagance and waste….”

Born in Plymouth, Vermont, on July 4, 1872, Coolidge was the son of a village storekeeper. He was graduated from Amherst College with honors, and entered law and politics in Northampton, Massachusetts. Slowly, methodically, he went up the political ladder from councilman in Northampton to Governor of Massachusetts, as a Republican. En route he became thoroughly conservative.

At 2:30 on the morning of August 3, 1923, while visiting in Vermont, Calvin Coolidge received word that he was President. By the light of a kerosene lamp, his father, who was a notary public, administered the oath of office as Coolidge placed his hand on the family Bible.

As President, Coolidge demonstrated his determination to preserve the old moral and economic precepts amid the material prosperity which many Americans were enjoying. He refused to use Federal economic power to check the growing boom or to ameliorate the depressed condition of agriculture and certain industries. His first message to Congress in December 1923 called for isolation in foreign policy, and for tax cuts, economy, and limited aid to farmers.

He rapidly became popular. In 1924, as the beneficiary of what was becoming known as “Coolidge prosperity,” he polled more than 54 percent of the popular vote.

In his Inaugural he asserted that the country had achieved “a state of contentment seldom before seen,” and pledged himself to maintain the status quo. In subsequent years he twice vetoed farm relief bills, and killed a plan to produce cheap Federal electric power on the Tennessee River.

The political genius of President Coolidge, Walter Lippmann pointed out in 1926, was his talent for effectively doing nothing: “This active inactivity suits the mood and certain of the needs of the country admirably. It suits all the business interests which want to be let alone…. And it suits all those who have become convinced that government in this country has become dangerously complicated and top-heavy….”

Coolidge was both the most negative and remote of Presidents, and the most accessible. He once explained to Bernard Baruch why he often sat silently through interviews: “Well, Baruch, many times I say only ‘yes’ or ‘no’ to people. Even that is too much. It winds them up for twenty minutes more.”

But no President was kinder in permitting himself to be photographed in Indian war bonnets or cowboy dress, and in greeting a variety of delegations to the White House.

Both his dry Yankee wit and his frugality with words became legendary. His wife, Grace Goodhue Coolidge, recounted that a young woman sitting next to Coolidge at a dinner party confided to him she had bet she could get at least three words of conversation from him. Without looking at her he quietly retorted, “You lose.” And in 1928, while vacationing in the Black Hills of South Dakota, he issued the most famous of his laconic statements, “I do not choose to run for President in 1928.”

By the time the disaster of the Great Depression hit the country, Coolidge was in retirement. Before his death in January 1933, he confided to an old friend, “. . . I feel I no longer fit in with these times.”