His son, George W. Bush , is the 43rd President of the United States. As a result George H. W. Bush is sometimes referred to as “the Elder Bush”, “Bush the Elder”, “Bush Senior,” “Bush 41”, or “the first President Bush” in order to avoid possible confusion between his presidency and that of his son. (Note that contrary to popular conception outside the U.S., Bush and his son are not ” senior ” and ” junior ” but rather just father and son with very similar names.) 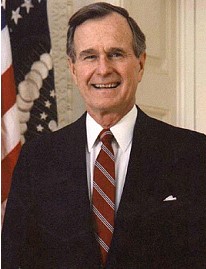 George Bush’s father, Prescott Bush , served as a Senator from Connecticut and was a partner in the prominent investment banking firm Brown Brothers Harriman.

George Bush attended Phillips Academy in Andover, Massachusetts from 1936 to 1942 , where he demonstrated early leadership, captaining the baseball team, and was a member of an exclusive fraternity called the A.U.V, or “Auctoritas, Unitas, Veritas,” Latin for “Authority, Unity, Truth”. His roommate at the boarding school was a young man named Edward G. Hooker. It was at Phillips Academy that Bush learned of the surprise attack on Pearl Harbor , and after graduating in June, 1942 , he joined the US Navy .

He was a naval aviator during World War II , the youngest ever at that time, and earned the Distinguished Flying Cross for his service in the Pacific Theater .

After the War he attended Yale University , and was inducted into the secret society (essentially a fraternity) Skull and Bones , helping him to build friendships and political support. Joining the fraternity a year after him at Bush’s request was William Sloane Coffin , a fellow classmaste from the Phillips Academy. They would remain friends and, at times, enemies, throughout their lives, though Coffin became a notable anti-war activist of the political left.

He married Barbara Pierce on January 6 , 1945 . Their marriage produced 6 children: George W. , Pauline Robinson “Robin” ( December 20 , 1949 – October 11 , 1953 , died of leukemia); John (Jeb) ; Neil ; Marvin ; and Dorothy Walker ( August 18 , 1959 – ). The family has built on his and his father’s political successes, with his son George W. Bush’s Governorship of Texas and subsequent election as President, and his son Jeb Bush’s election as Governor of Florida . The Bush political dynasty has been compared to that of John Adams and the Kennedy family .

Bush ventured into the Texas oil business after the war with mixed results. He secured a position with Dresser through his father’s investment banking relationship with the company. His son, Neil Mallon Bush, is named after his employer at Dresser, Neil Mallon, a close family friend. Dresser, decades later, merged with Haliburton, whose former CEO’s include Dick Cheney, George H. W. Bush’s Secretary of Defense during the Gulf War and now (2004) Vice President of the United States and former George W. Bush campaign manager.

In 1964, Bush ventured into conventional politics by running against Democratic Senator Ralph Yarborough , making an issue of Yarborough’s vote for the Civil Rights Act of 1964 which almost all Southern politicians (including the Republican Sen. John Tower of Texas) opposed. He called Yarborough an “extremist” and a “left wing demagogue” while Yarborough said Bush was a “carpetbagger” trying to buy a Senate seat “just as they would buy a seat on the New York Stock Exchange.” Bush lost in the 1964 Democratic landslide.

He was later elected in 1966 and 1968 to the House of Representatives from the 7th District of Texas. He later lost his second attempt at a Senate seat in 1970 to Democrat Lloyd Bentsen who defeated the incumbent Yarborough in the Democratic primary. He served as United States Ambassador to the United Nations , US Envoy to communist China , Director of the Central Intelligence Agency and on the executive board of the Committee on the Present Danger .

In 1980 , Bush ran for President, losing in the Republican Party primaries to Ronald Reagan , the former Governor of California . After nearly choosing former President Gerald Ford as his running mate, Reagan selected Bush as his Vice President, placing him on the winning Republican Presidential ticket of 1980. Bush had been many things Reagan had not been, a military man, a life-long Republican, and an internationalist with UN, CIA and China experience.

The Reagan/Bush ticket won again in 1984 , against the Democrats’ Walter Mondale / Geraldine Ferraro ticket. In 1988 , after 8 years as Vice President, Bush ran for President with the little known Senator Dan Quayle as his running mate and beat Michael Dukakis and Lloyd Bentsen , 426 to 111 electoral votes . (Lloyd Bentsen received one.)

During his second term as Vice President , Bush had the distinction of becoming the first Vice President to become Acting President when, on July 13 , 1985 , President Reagan underwent surgery to remove cancerous polyps from his colon. Bush served as Acting President for approximately 8 hours, during which time he is reported to have spent most of the time playing tennis.

As President of the United States, George Bush is perhaps best known for leading the United Nations coalition in the 1990-1991 Gulf War . In 1990, led by Saddam Hussein , Iraq invaded its oil-rich neighbor to the south, Kuwait . The broad coalition sought to remove Iraqi forces from Kuwait and ensure that Iraq did not invade Saudi Arabia . President Bush’s popularity rating in America soared during and immediately after the successful military operations, but later fell due to an economic recession.

A mild economic recession from July 1990 to March 1991 was a contributing factor to his defeat in the 1992 Presidential election . Several other factors were key in his defeat, including siding with Congressional Democrats in 1990 to raise taxes despite his famous “read my lips” pledge not to institute any new taxes. In doing so, Bush alienated many members of his conservative base, losing their support for his re-election. Another major factor, which may have helped Bill Clinton defeat Bush in the 1992 election was the candidacy of Ross Perot . Perot won 19% of the popular vote, and Clinton, still a largely unknown quantity in American politics, won the election.

After losing the election, Bush has retired from public life. After retiring, he did, however, notably parachute from an airplane for the first time since World War II. The Bushes live in Houston, Texas and their summer home in Kennebunkport, Maine .

The George Bush Presidential Library and Museum is located on the Southwest corner of the Texas A&M University campus in College Station, Texas .

The tenth Nimitz -class aircraft carrier will be named USS George H. W. Bush when it is launched in 2009 .

George Bush Intercontinental Airport in Houston, Texas was renamed after the former president in 1997.