James Buchanan (April 23, 1791 – June 1 , 1868) was the 15th ( 857 – 1861) President of the United States . He was the only President never to marry, and the only citizen of Pennsylvania to hold that office. He has been criticized for failing to take any positive action in order to attempt to prevent the country from sliding into schism and civil war. 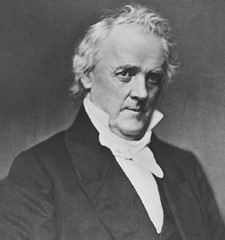 Buchanan was a Representative and a Senator from Pennsylvania. He was born at Cove Gap, near Mercersburg, Franklin County, Pennsylvania , on April 23 , 1791 . He moved to Mercersburg with his parents in 1799 , was privately tutored and then attended the village academy and was graduated from Dickinson College , Carlisle, Pennsylvania . In 1809 he moved to Lancaster, Pennsylvania . The same year he studied law, and was admitted to the bar in 1812 and practiced in Lancaster. He was one of the first volunteers in the War of 1812 and served in the defense of Baltimore, Maryland . He was a member of the Pennsylvania State House of Representatives from 1814 to 1815 . He was elected to the Seventeenth and to the four succeeding Congresses ( March 4 , 1821 – March 3 , 1831 ). He was chairman of the Committee on the Judiciary (Twenty-first Congress). He was not a candidate for renomination in 1830 . Buchanan served as one of the managers appointed by the House of Representatives in 1830 to conduct the impeachment proceedings against James H. Peck, judge of the United States District Court for the District of Missouri . Buchanan served as Minister to Russia from 1832 to 1834 .

Buchanan was elected as a Democrat to the United States Senate to fill the vacancy caused by the resignation of William Wilkins. He served from December 6 , 1834; was reelected in 1837 and 1843 , and resigned on March 5 , 1845 , to accept a Cabinet portfolio. He was chairman of the Committee on Foreign Relations (Twenty-fourth through Twenty-sixth Congresses).

In regards to the growing schism in the country, he as President-elect, thought the crisis would disappear if he maintained a sectional balance in his appointments and could persuade the people to accept constitutional law as the Supreme Court interpreted it. The Court was considering the legality of restricting slavery in the territories, and two justices hinted to Buchanan what the decision would be.

In his Inaugural the President referred to the territorial question as “happily, a matter of but little practical importance” since the Supreme Court was about to settle it “speedily and finally.”

Two days later Chief Justice Roger B. Taney delivered the Dred Scott decision, asserting that Congress had no constitutional power to deprive persons of their property rights in slaves in the territories. Southerners were delighted, but the decision created a furor in the North.

Buchanan decided to end the troubles in Kansas by urging the admission of the territory as a slave state. Although he directed his Presidential authority to this goal, he further angered the Republicans and alienated members of his own party. Kansas remained a territory.

When Republicans won a plurality in the House in 1858 , every significant bill they passed fell before southern votes in the Senate or a Presidential veto. The Federal Government reached a stalemate.

Sectional strife rose to such a pitch in 1860 that the Democratic Party split into northern and southern wings, each nominating its own candidate for the Presidency. Consequently, when the Republicans nominated Abraham Lincoln, it was a foregone conclusion that he would be elected even though his name appeared on no southern ballot. Rather than accept a Republican administration, the southern “fire-eaters” advocated secession.

President Buchanan, dismayed and hesitant, denied the legal right of states to secede but held that the Federal Government legally could not prevent them. He hoped for compromise, but secessionist leaders did not want compromise.

Then Buchanan took a more militant tack. As several Cabinet members resigned, he appointed northerners, and sent the Star of the West to carry reinforcements to Fort Sumter. On January 9 , 1861 , the vessel was far away.

He retired to his home “Wheatland,” near Lancaster, Pennsylvania , where he died June 1 , 1868 . He was interred in Woodward Hill Cemetery, in Lancaster.

Some people have speculated that Buchanan may have been gay. They point to the unusual circumstances surrounding his failed engagement to Ann Coleman , the fact that he never married, and his very close personal relationship with former United States Vice President William R. King . The theory is controversial and a source of debate.